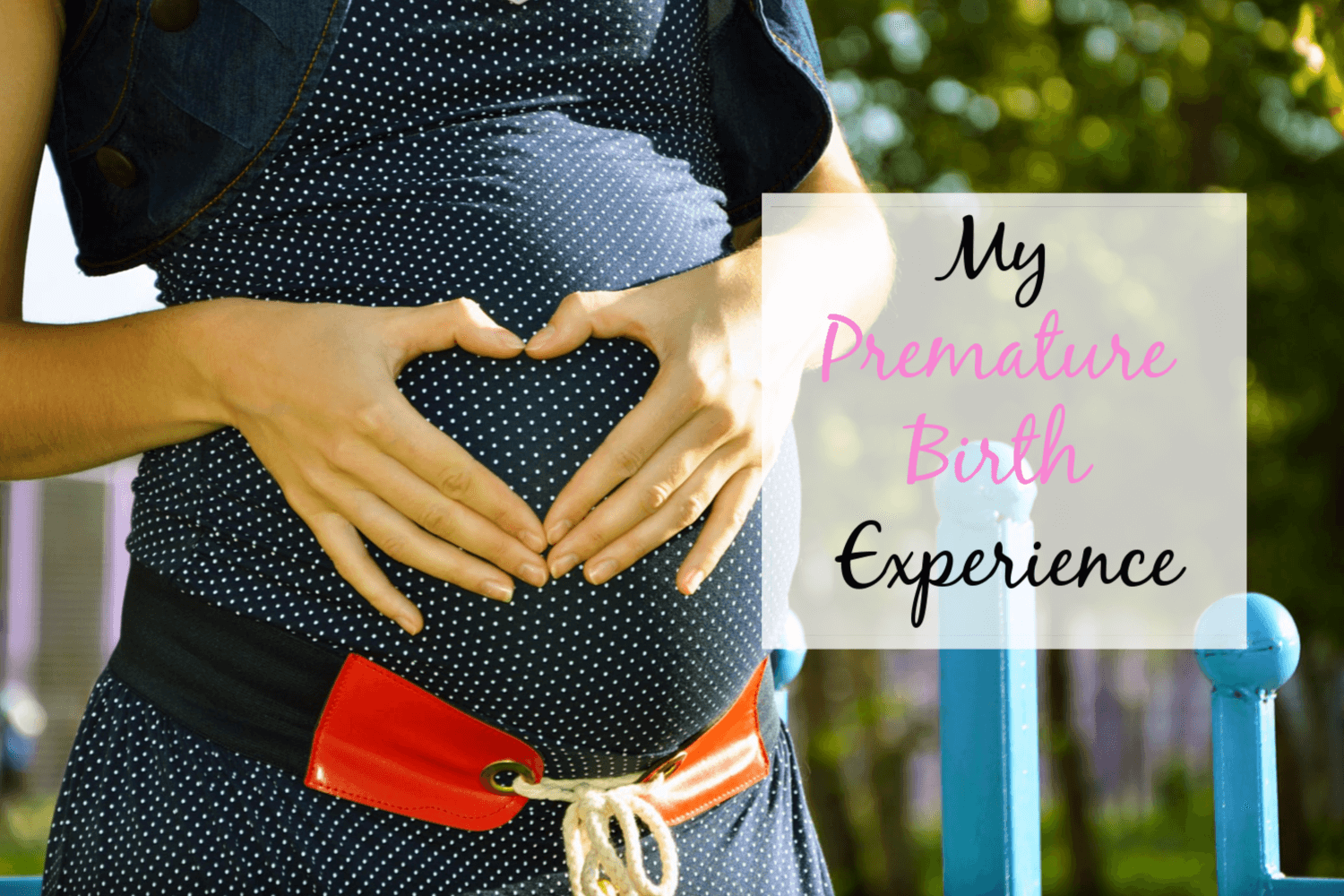 I experienced a silent placental abruption when I was 33 weeks pregnant with my daughter.

In case you are wondering what that is, I’ll explain: a placental abruption occurs when the placenta (the lifeline delivering blood, oxygen and nutrients to our baby) peels away from the uterus. It deprives the fetus of oxygen and causes the mother to hemorrhage internally.

One week before I had our daughter via emergency c-section at 33 weeks.

I got the flu about 5 days before my silent placental abruption was discovered.

As a nurse I knew that just having a cold or flu generally doesn’t hurt an unborn baby and may even give her a few extra antibodies. I decided the best thing to do was rest and drink lots of fluids.

But to my surprise, two days later I wasn’t feeling better and had worsening fatigue, dizziness, a horrible sore throat, and a headache.

I called the OB floor at our hospital and was directed to an advice nurse.

After a 30 minute phone interview and a detailed discussion about my symptoms I was instructed to stay home. I just had the flu, she said. I should rest and drink lots of fluids. So I took the advice and tried to rest as much as I could.

Fast forward two more days and my dizziness and symptoms were only getting worse. I was even having difficulty walking from one side of the house to the other. So again, I called the OB unit at my hospital because I thought for sure they would want me to come in.

I spoke with both the on-call OBGYN on the unit and another advice nurse. After another detailed discussion about my symptoms I was again instructed to stay home. “Please do not come to the hospital,” the doctor stated clearly.  “There is nothing we can do for you.”

I tried to explain the best I could that I was extremely weak and short of breath when walking more then 20 feet. I didn’t have a fever, but I had never felt more sick in my life. They told me I just had the flu and needed to “ride it out.”

So I laid in my bed and cried for 30 minutes because every inch of my body was hurting so much that I could barely stand it anymore. I had a hard time catching my breath.

(Later we found out that the reason I felt so horrible was that my hemoglobin was extraordinarily low due to the silent placental abruption already having started. My hemoglobin (the oxygen carrying component of a blood cell) at that time was 6 grams per deciliter. The normal level is 12.0 to 15.5 grams.)

I laid down for an hour and started doing “kick counts.”

The American Congress of Obstetricians and Gynecologists (ACOG) recommends that you time how long it takes you to feel 10 kicks, flutters, swishes, or rolls. Ideally, you want to feel at least 10 movements within 2 hours. Usually a mom can feel 10 movements in less time than that.

But I only felt 4 or 5 movements in that hour period. But my body was so sick and achy that I wasn’t sure exactly what I was feeling, so I drank two large glasses of orange juice and ate a small bag of gummy Lifesavers. I was determined to sugar-shock my baby into giving me more fetal movements.

I began counting kicks for a second hour.  But after about 40 minutes I still only counted about 3-4 pretty weak kicks. At that point I decided I wanted to see a doctor, even if they thought I was overreacting.

I called my husband and asked him to come home and drive me to the hospital.

When we arrived at the labor and delivery unit I was immediately given a mask and asked why I came to the hospital after I was specifically told not to. I was once again reminded that I was bringing my flu into the hospital and putting patients at risk for infection.  They were clearly frustrated with me by the tone of their voices.  I kept thinking “am I not a patient too?”

I explained my symptoms once again and told them that I thought the baby should be kicking more. They put me in a room and we waited for the on-call OBGYN.

When she arrived she did an ultrasound.  I could tell by the look on her face that something was very wrong.  She stated very clearly that she was extremely concerned about our baby’s safety.  This is what she told us:

She didn’t know at that time I was actually having a silent placental abruption. Apparently it is very hard to diagnose on ultrasound.

(We later found out that the amniotic fluid was showing as the wrong color because it was actually blood, not amniotic fluid.  I had already been bleeding into my uterus and our daughter had been swallowing blood. After the C-section they pumped 15 cc’s of blood out of our daughter’s stomach and she pooped blood for the next few days.)

A team of preemie doctors came in to prepare us.

The preemie doctors explained in detail what would most likely happen to our daughter since she was coming out 7 weeks early. They said it was likely that our daughter would not be able to breathe on her own and that she would need to be intubated (using a machine that breathes for her). In the case that I didn’t hear her cry after delivery, they wanted to make sure I was prepared for that possibility.

We were also told to prepare for 30 days in the NICU, which was the average length of stay for a “33 weeker.”  They initially wanted to try delaying a c-section for 48 hours so they could give me steroids to help develop our baby’s lungs develop faster.  But we weren’t able to wait that long.

Within a few hours things got much worse.

Soon, I started hemorrhaging and was having what felt like one long contraction that wouldn’t stop.

Our OB determined that I was not actually in labor as my cervix was completely closed. She thought it was best to take the baby out right then because something was very wrong, but she didn’t know exactly what yet. I was wheeled across the hall for the emergency C-section.

Our daughter, Zoe Grace, was born.

Zoe came out at 4 pounds, 3 ounces. After being suctioned, she let out a tiny little cry that I will never forget. It was the best and most beautiful sound I had ever heard in my life.

The doctor was able to confirm during the c-section that I had a placental abruption. My placenta was 30% detached from my uterus.

The next day our neonatologist told us that Zoe had no signs of brain damage and we had a “very healthy baby considering the circumstances.”  He then let me know bluntly, and in no censored way that “babies born under my circumstances usually don’t survive and the mothers often don’t do that well either.”  He basically told me he couldn’t believe that she had no brain damage.

We were so grateful for the excellent care she received in the NICU. 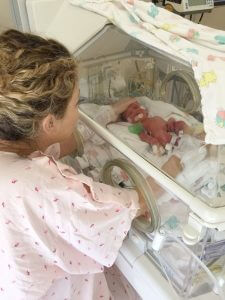 We were so grateful for the excellent care Zoe got in the NICU.

Admittedly, I was shocked when I saw her for the first time. She was in an incubator hooked up to so many IV’s and tubes.  And she was so very tiny.

For the first 48 hours I was not allowed to hold her. That was so hard for me!  But, I could put my hands in the incubator and place one hand on the top of her head and one on her feet.  I remember telling her how proud we were of her.  She was a tough little gal right from the start.  “Tiny but mighty” was what the doctor said. What a wonderful feeling it was to finally be able to finally hold her on her third day of life.

Zoe had an oral-gastric feeding tube for nutrition since she was unable to eat for the first 7 days on her own. I would pump breast milk and give it to the nurses so they could feed her through her OG tube.

She was also receiving TPN (IV nutrition) and lipids (fats) through 2 IV lines. That was probably the most difficult part to watch.  Preemie veins are so tiny that it would often take an hour of poking to get the IV in. And they didn’t last very long so she was constantly being stuck with needles.

She was on oxygen and a cpap machine for the first week to help her continue breathing on her own. She was also kept under a bilirubin light for 5 days to treat her jaundice.

2nd week in the NICU. Zoe earned the nickname “tiny but mighty.”

Zoe got a little stronger every day.

Our “tiny but mighty” preemie started doing more on her own, like eating through a preemie nipple and no longer needing the IV nutrition.

We were shocked on our 9th day in the NICU when we were informed that Zoe would be discharged the next day. I knew she was doing well, but we were told that due to her stage of prematurity that she would stay for at least a month. She was so tiny I couldn’t believe they were letting us take her home.

My experience taught me a few things…

I can’t imagine what my life would be like now if I hadn’t gone into the hospital that evening, especially after being told not to by the staff. My life would have been turned up-side-down.  I am so glad that I trusted my instincts that night!

I am so blessed that I get to be a mom.

Not everyone gets to have healthy baby, or a baby at all for that matter. Whenever I find myself getting frustrated with the difficulties that come with parenthood, I think about how close we were to not getting to have Zoe at all. That puts it all into perspective for me.

Our baby Zoe is turned 3 years old on Halloween.  She loves Elmo so she decided to choose Elmo as her Halloween costume.  In honor of her birthday our family dressed up as the whole Sesame Street gang.  My husband was Cookie Monster, I was Big Bird, and our 9-month-old son, Oliver, was Ernie. It was a wonderful celebration that I especially treasured because I know just how lucky I am to have two “tiny but mighty” kiddos.

Thank you for reading our story.